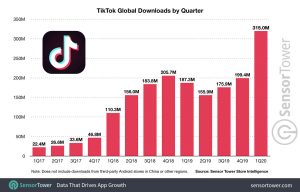 Analytics platform SensorTower reported that the ByteDance-owned short video app has amassed more than 2 billion downloads on Apple’s App Store and Google Play Store combined, a milestone that comes just five months after the app hit the 1.5 billion download mark, research firm SensorTower said on Wednesday. According to data, TikTok is the first app after Facebook’s marquee app, WhatsApp, Instagram and Messenger to break past the 2 billion downloads figure.

In the first quarter of 2020, TikTok was downloaded over 315 million times globally, more than any other app for the period, SensorTower said. The figures did not include third-party app stores hat are still very popular in China.

Sensor Tower noted India (30.3%), China ( 9.7%), and the US (8.2%) are the countries that account for the most downloads. Experts partly attributed TikTok’s download growth to the global Covid-19 pandemic which has confined people around the world to their homes and increased the consumption of online content on mobile devices. Only in India, the world’s second largest internet market, TikTok the app has been downloaded 611 million times.

As the app expands its global footprint, TikTok is reaping huge benefits from its users, who have so far spent $456.7 million on the app, compared with $175 million five months ago, SensorTower said. About 72.3% of TikTok’s total revenue came from China, where the app is known as Douyin. The US ranked second in terms of user spending with 19%, media reported.